Webtoon Wiki
Register
Don't have an account?
Sign In
Advertisement
in: Webtoons with Wikis, Completed Webtoons, Canvas,
and 2 more

ONE NEO EON was a Sci-fi and Slice of life Canvas Webtoon created by Shonen Bag and 少年バッグ; it concluded on August 29, 2020.

Have YOU ever felt like you can't create anything? Then meet Eon, an advanced AI dealing with your exact same problem, only worse! Luckily, Eon is given the chance to learn how to create from the world's greatest artist... who happens to also be a snarky little girl with seriously messed up friends! Watch as they ponder the nature of humanity and together unravel their own flawed ideologies in this cute philosophical deconstruction of the idea of Creation!

An AI created by Satomi Virgil. Learning creation from Multis Kwahn. Generally refined and stiff, but rather empathetic.

AKA Kawashima Yumiko （川島祐美子. Mysterious girl. Appears to be dating the creator of the webtoon. (The logic of this is never explained.) Exceptionally kind and sweet, though claims to not care about anybody save for her boyfriend. Has unauthorized knowledge of 95-E due to her shady past with Ningen 108.

A weaboo chunnibyou middle schooler. Convinced the Canadian government is "fascist" and must be taken down with war robots.

The straight man of the group, Emily is shown to be just as mad as everyone else in reality.

The coward who built Eon. Hopelessly in love with Misako. Lab 89 member.

A tsundere who avoids contact with Virgil to avoid making him upset. Lab 89 member.

An eccentric mad scientist and a great listener. Lab 89 member.

A mysterious robot sent out to capture Eon or destroy him.

A doctor that tends to Multis's condition and explains her illness to her parents.

A 17-Year-Old girl living in Shanghai bearing the first documented case of Multis's illness. She died in 2013. Her identity is yet to be revealed, though some suspect that it could be the character Zi Lianhua from the Turn franchise. (A set of unlisted videos on the Shonen Bag Studio youtube channel, accessible via playlist. The events described here are shown in the second "movie", Their Turn.

An arms dealer working for the Siblings of Death. She seems to know Cantonese on top of English or Japanese. She apparently hates Japanese people but has been ordered by her higher ups at Ningen 108 to supply Hunters to Yamoto's division in order to hunt down AI. Why this multi-step process exists is presently a mystery.

A member of the Siblings of Death. His character is greatly expanded on in the Turn franchise. He is revealed to be a high-ranking member of the organization based in Shanghai, trying to obtain a chessboard from a former member. He was shot by an enemy of the Siblings sometime in 2013 but was also revived by super-being gods controlling the events of the Turn movies. (It is unknown if these gods have control over One Neo Eon.) He is only mentioned in One Neo Eon.

A skeptic who does the Turing Test meant to introduce Eon in the first chapter. Named Hua Qian because of a retcon from the author himself on July 12th, 2019. Hua is also transgender, according to the Shonen Bag discord. 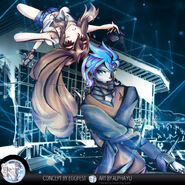