True Beauty is a featured Romance Webtoon created by Yaongyi; it updates every Wednesday. The original webtoon is in Korean.

The series follows protagonist Jugyeong Lim, who, after being bullied for her appearance, becomes a very skilled makeup user. When Jugyeong enters high school, she manages to convince others that her beautiful, made-up face is her natural appearance. Jugyeong befriends Suho Lee while in school: a wealthy, cold boy whom she runs into, bare-faced, at a comic book shop. She later meets Seojun Han, an aggressive student with a mysteriously good singing voice. The plot follows Jugyeong as she navigates her daily life and goal of becoming a cosmetologist.

After binge-watching beauty videos online, a shy, comic book fan masters the art of make-up, then sees her social standing skyrocket as she becomes her school’s prettiest pretty girl literally overnight. But will her elite status be short lived? How long can she keep her “real self” a secret? And what about that cute boy she likes? Could you imagine if he found out the truth? 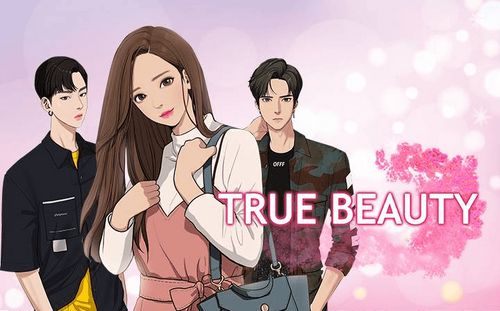 The protagonist of the series. A skilled makeup artist and, later, an Instagram influencer, with hopes of becoming a cosmetologist. She debuted at Saebom High School as the pretty girl, hiding her true face from the rest of the school. She is currently an Nstagram influencer and studies film at a local community college.

A son of a popular Korean actor who befriends Jugyeong after helping her study. Known for his intelligence, good looks, and cold personality. He is currently an undergraduate student at MIT studying engineering. He was Jugyeong Lim's first love interest and was best friends with Seojun Han in middle school and also graduated from Saebom High school.

A former idol trainee, who befriends Jugyeong through his younger sister. Currently works as a model to support his family. He is also Jugyeong Lim's boyfriend and was best friends with Suho Lee in middle school.

Retrieved from "https://webtoon.fandom.com/wiki/True_Beauty?oldid=10558"
Community content is available under CC-BY-SA unless otherwise noted.